My Dublin experience: before, back then and now

In 2015 I did this project named “Al desnudo” (naked) where I interviewed 5 people from different parts of the world who were living in Dublin city. They were totally exposed; from their bodies until their souls, they explained me the reasons why they decided to come to live in Ireland. These are their stories and their lives BEFORE, BACK THEN and AFTER the Dublin experience.

Marcos, the introverted guy with a rock band

Marcos was born and raised in Brazil, ex-worker of Walt Disney Company and musician for passion, Marcos decided left his country to jump into the unknown adventure of a country called Ireland.

When we talked about his decision to come to Ireland, Marcos told me that the only thing that he wanted was to be apart from the stress that he was having in Brazil.

“In Brazil, I lost my job, so I decided to do something totally new for me, so I sold my car and put all that I had to come here, to renew my life”

It seems to be a shy guy, introverted, but with a smart sense of humor, this guy was the leader in a rock band for about 4 years in Brazil.

“Few people just know how is the sensation that you have at the time to write a song, you sing for everyone and you see everyone singing back the song that you wrote for you; that´s an incredible sensation. For me is better than sex…it is a climax”

As a showman, Marcos has that disease that many musicians keep, the anxiety and the craziness of the human psyche.

«I had many problems that began to depressed me, adding to the fact that I had a neighbor that used to talk alone all the nights saying words about dead, that perturbed my soul, so one day I grabbed my own fecal feces and I wrote on his door “Son of a bitch”»

After this act, Marcos knew that his mental health was deteriorating and he only desires a new beginning far away from the boastful Brazilian’s cities.

“Before came here I didn´t know what to do in my life, I was lost, I was wondering what I have to do, because I didn´t want to be in an office the rest of my life, just hearing the demanding from my boss…I wanted to be free” 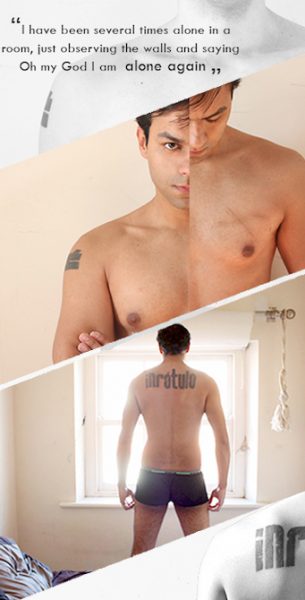 In Dublin Marcos has found that piece of tranquility, the moments of peace without problems and especially without crazy neighbors.

“I think when I will come back, I would have a better point of view of the things”

As all the subject of my experiment, I asked Marcos to be photographed in the intimacy of his house and body. Under the layers, some tattoos were exposed and Marcus talked to me about the meanings:

Inrotulo: Word that doesn´t exist but it represents the band where he has singing and it is an abbreviation of “unlabeled”.

No equal symbol: It is a representation of the transition in his life and also of himself.

Tattooed on the same skin, I was able to see some particular scars on his chest, those were some scratch that formed an “x”.

Every time a girl broke my heart and I became upset with this I used to make an “X” on my heart, trying to remind me not to be stupid…not to be involved with someone

But in that crazy reasoning, there was a spot of sanity and Marcus realized it:

“You can see I did it several times because several times a girl has broken my heart. But since I came to Dublin I stopped doing this, I stopped self-mutilation because I don´t want this” 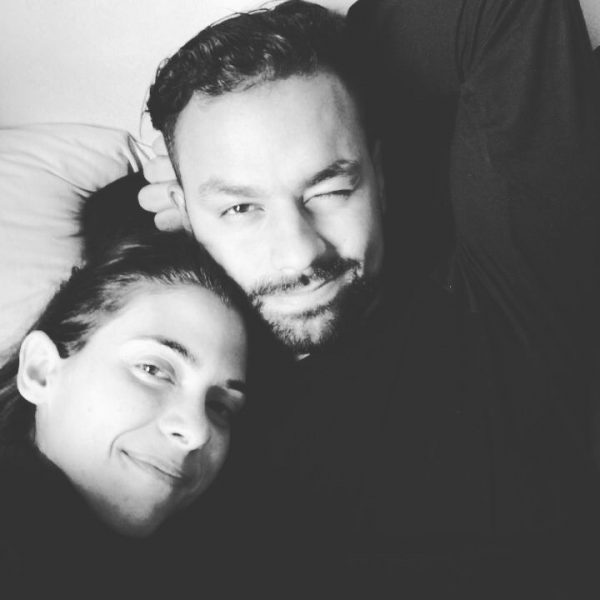 Now, Marcos went back to Brazil and he is focused on finding a new job. He kept that idea to have a quality of life in a workplace. So, he wants to work in something related to Music, Games or Dogs (Marcos loves dogs). Meanwhile, he studied acting and that help him to be less shy.

About his love life. He finally found someone that really cares about him. His girlfriend Bruna is a Handball trainer and the chemical between them is very good. They’re together about 8 months and they’d never had simple argue each other. And “find his other half” helped him a lot to fight against his depression and move on. Thanks to that, his scars are never made again and are almost disappearing from his skin. They travel a lot and his weekends are one better than other. For the future, they have plans to study at university and maybe do another exchange trip.

And about his annoying neighbors. They moved on after several complaints from Marcos and the others residents. So he started to have an improvement of his quality of life and the life follows as the way he wanted.